skip to main | skip to sidebar

With April drawing ever nearer, the likelihood that you will be asked to donate money to Autism Speaks approaches one. I encourage you not to give them your money, and this is why:

1) Very little money donated to Autism Speaks goes toward helping autistic people and families: According to their 2010 annual report, only 4% of Autism Speaks’ budget goes towards the “Family Service” grants that are the organization’s means of funding services: 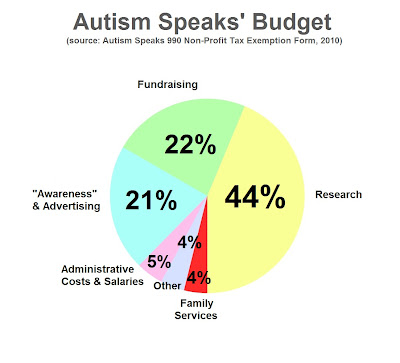 While 44% of Autism Speaks’ budget goes toward research, only a small percentage of these funds go towards research into improving the quality of life of autistic people. Most of the research which Autism Speaks funds is devoted to issues of causation and “prevention,” including the prospect of prenatal testing.


3) Their fundraising strategies promote fear, stigma, and prejudice against autistic people. Autism Speaks uses damaging and offensive fundraising tactics which rely on fear, stereotypes and devaluing the lives of people on the autism spectrum. Autism Speaks’ advertisements and “awareness” campaigns portray autistic adults and children not as full human beings but as burdens on society that must be eliminated as soon as possible.


4) Autism Speaks is not financially responsible. Although Autism Speaks has not prioritized services with a practical impact for families and individuals in its budget, its rates of executive pay are the highest in the autism world, with some annual salaries exceeding $400,000 a year. Additionally, their fundraising expenses exceed their spending on most of their core programs. Given these facts, Charity Navigator rated their financial health as 2 out of 4. 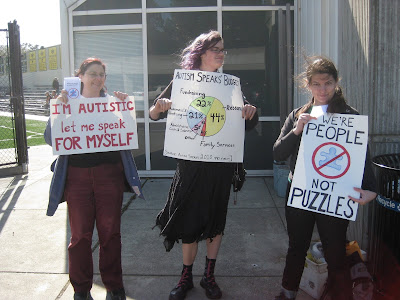 If you would like to donate money to organizations which help autistic people, I recommend:

- The Autistic Self-Advocacy Network (ASAN), which provides support, community, and public policy advocacy, by and for people on the autism spectrum.

- Academic Autism Spectrum Partnership in Research and Education (AASPIRE), which
brings together the academic community and the autistic community to develop and perform research projects relevant to the needs of people on the autistic spectrum.

Labels: 101, Autism Awareness Month, nothing about us without us

[I've been asked to put a disclaimer on this post letting people know that they can repost it as part of the blogaround on the subject of the murder of disabled people by their caregivers. Absolutely, I give permission for this, UNLESS you are Autism Speaks. Autism Speaks doesn't have permission to use anything that I write. Thanks for reading.]


This is what went on the news:


This is what I said at the vigil:

Last Tuesday, George Hodgins was shot and killed by his mother, who then killed herself. George lived here in Sunnyvale and he was 22 years old. I didn’t know George, but I can’t stop thinking about him. Maybe it’s because we have a lot in common – we lived near each other, we were the same age, we’re both autistic, although we led very different lives. I would like to have met George, but I can only mourn him. And I can try to make sure that his story isn’t forgotten.

In the wake of this tragedy, I read a lot of articles that asked the readers to imagine how George’s mother must have felt. But I didn’t see a single article that asked the reader to empathize for George, to imagine how it feels to see your mother point a gun at you. I’ve seen a lot of people talking about how hard it must be to live with an autistic relative, but I didn’t see anyone talking about how terrible it must be to die knowing that your parent, who you love and depend on, has decided to hurt and kill you.

Because he was autistic, George is being erased from the story of his own murder.

I don’t think this is a true story.

Why is the story being told this way? Because we live in a world that doesn’t acknowledge the value of our lives as disabled people. Because so many people in our society can’t imagine a disabled person living a fulfilling life, so they don’t see the tragedy and the wasted potential when one of our lives is cut short.

As disabled people, we have to take a stand against this kind of thinking. We have to get the word out that our lives matter, that our lives are our own stories and not just the stories of our non-disabled parents and relatives and caretakers. We have to let people know that they are missing part of the story.

Because the story of George Hodgins’ murder is also the story of the disabled community losing one of our own. It’s the story of the other disabled people who were murdered by their family members, and it’s the story of the society that thinks so little of people with disabilities that these murders are all too often justified as “understandable.” Most of all, it’s George’s story – the story of a young man who enjoyed hiking, who was always looking to learn new skills, who had his whole life in front of him.

Now George is gone, and only his memory remains, and already that memory is being distorted by people who want to tell his story and leave him out. That’s not going to happen tonight. We’re here to remember the real story.
Posted by Zoe at 12:18 AM 3 comments:

I used to blog a lot. Since the TPGA dialogues I... haven't, so much. I would like to again.

So to get back in the habit of throwing new text onto this website, a new Recommended Reading post, in two acts.

Fun fact: I can be seen in this video, and so can many of my friends!

If you haven't yet watched the Loud Hands Project video, or read about this exciting new campaign on their fundraising page, you should definitely check it out. If you haven't donated yet, there are 13 days left in which to do so!

Argument: "Everyone in the special needs community needs to stop getting so darn offended and just get along!"
Rebuttal: I'll Take Offense, If You Don't Mind, by Rachel Cohen-Rottenberg

Argument: "I don't have to listen to what you say about autism because my kid is more severely affected than you/than your kid."
Rebuttal: "My Kid Isn't Like You(rs)!" by Melody at ASParenting
Posted by Zoe at 2:15 PM No comments:

Pedagogy of the Confused

I became politically aware when I learned how to say “I don’t understand.” This didn’t happen until I was 20 years old.

There are some things that are harder for me to understand than others. My confusion peaked in freshman year of college, when my Women’s Studies class moved from “101” material into more abstract, jargon-heavy content. Words seemed to fly through the air without being anchored to anything so mundane as a stable definition. At the same time, I realized that what I had been taught in high school about writing thesis statements no longer applied to college: I was going to have to relearn the definition of a thesis. This would have been fine, except for the fact that I didn’t understand any of the definitions that people were giving me.

I was filled with shame about this. What kind of college student didn’t know what a thesis was? How had an introductory Women’s Studies class got so beyond me? Did I really deserve to be at college? So if I had to ask for clarification, I often pretended to “get it” after a cursory explanation, when really I was still confused.

My problem with admitting confusion was that I had internalized the idea that my worth as a student was based on my ability to understand things within the same timeframe that others did. I did not feel entitled to ask for clarification when I was confused, because this would be admitting to having failed in my duty to understand. I wanted to tell the truth about what I was thinking, so that I could learn more thoroughly. But I was afraid of being thought of as unfit to be at college, because I had internalized the idea that good students didn’t get as confused as I do.

This semester, we read Pedagogy of the Oppressed in my Education class. The author, Paulo Freire, talks about the process through which an oppressed person learns about their oppression, a process he calls “conscientization.” I underwent this process in my freshman year, and it happened because I was so very confused. After I started hitting cognitive dead ends in my classes, I got online and started reading. I learned about privilege, ableism, disability rights. I became conscious of my oppression as a disabled person. And I began to see that the ideas about what a student should be – the ideas that had caused me so much shame – were not inherent in the universe. They were a product of prejudice.

Becoming politically aware meant that I no longer felt so terrible about not fitting into society’s idea of what a student should be. I started to think that perhaps society should widen its idea of a student enough to include me. I started to think that I deserved to understand the material, even if my process was slower than that of some of my classmates. Learning about disability rights has empowered me to be in control of my education, to ask questions without shame, to sometimes try to change my environment instead of always trying to change myself. And I have learned to utter the words “I don’t understand,” without apology and in a loud, clear voice.
Posted by Zoe at 9:22 PM 1 comment: